Brecken Merrill vividly remembers the day Kevin Costner asked him a question on the set of Yellowstone that would change the course of his life.

The budding actor tells ET he was miserably cold between takes as cameras were being propped up for a dramatic river scene in season 1 for "The Long Black Train" episode. The scene called for Merrill's character, Tate Dutton, and his grandfather, Costner's John Dutton, to bond over learning how to start a campfire, which required Tate to venture out into the deeper parts of the countryside to find heftier branches to really get the fire going.

The temperature was biting that day, but the scene still called for Tate to fall into the freezing river after stretching his body for a branch. Before that and between takes, Merrill — only 9 years old at the time — recalls having 20 hand warmers in his pocket, but the heat packs proved futile. And, while wretchedly rubbing his hands together, Merrill also recalls Costner turning to him to ask him a question that would lead to a month-long introspectiveness.

"Kevin says, 'Do you really, like, wanna do this? Is this what you really wanna do?'" Merrill says in a phone interview with ET. "I thought about it for the next month, and he kind of guided me to that area of, yeah, this is what I wanna do. This is my career. This is my passion. It's super cold. It's zero degrees, but I'm loving it. I wanna be here. I just wanna thank Kevin. I'm so blessed to work with such an amazing cast." 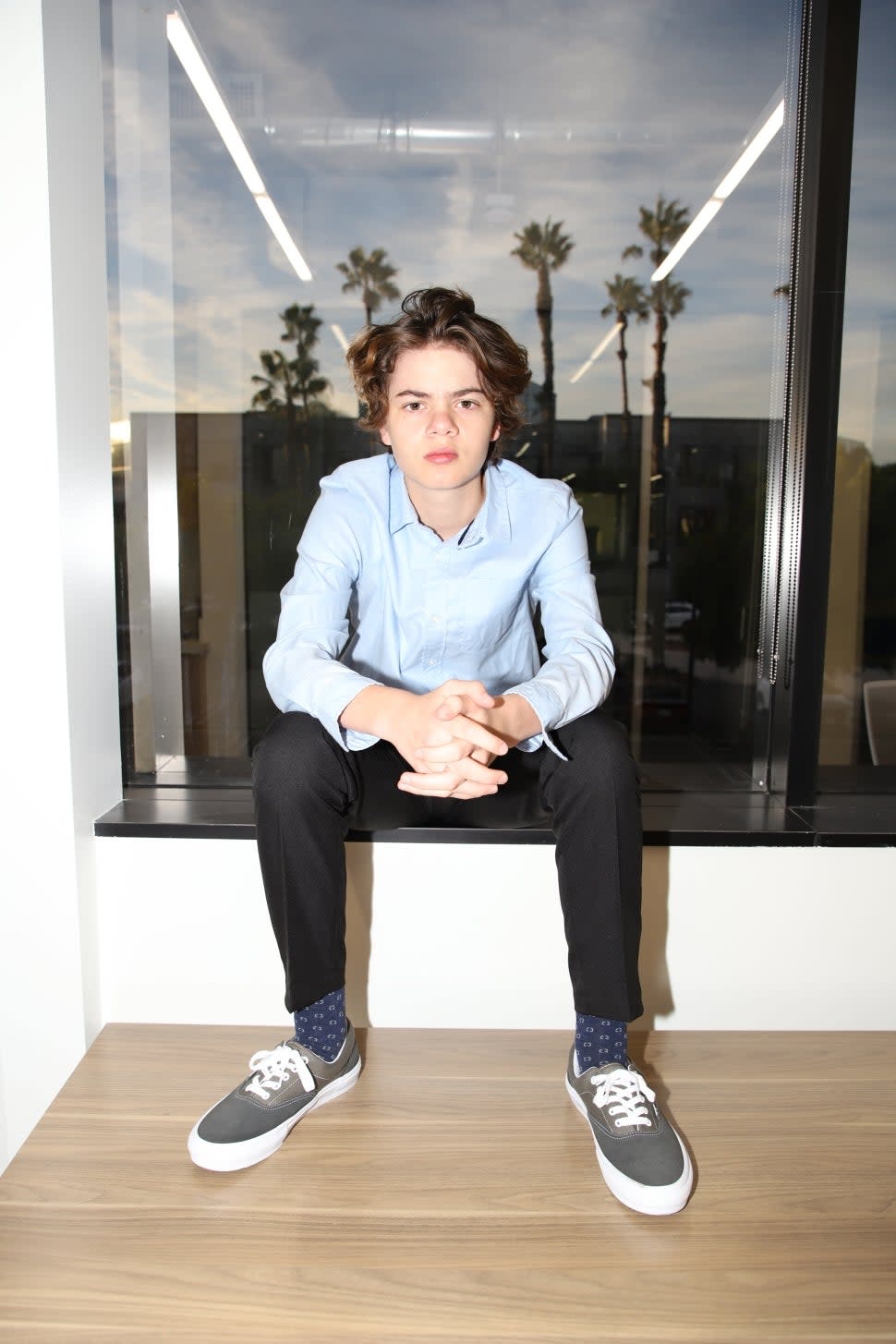 Merrill was 8 years old when he landed the role to play Costner's on-screen grandson on what's become one of the biggest shows on television. His parents, Jesse and Kristy Phillips, never could have have envisioned Yellowstone would spawn prequels and sequels in the so-called Taylor Sheridan universe, but they did know Merrill landing the role was a monumental feat, so much so they wanted to film his reaction to getting the good news. So, they concocted a ruse.

"My dad said that me and my sister needed to take a video for P.E. of us playing basketball — play for 30 minutes and send it to our P.E. teacher — when really they were filming my reaction to getting Yellowstone," Merrill recalls. "And my mom hands me — haha, prepare for an amazing joke — a yellow stone. She picked the stone, painted it yellow and gave it to me. She goes, 'You booked Yellowstone!' And I was like, 'Wait, what?!' I was so confused. I knew what she meant by it, but I couldn't really register it in my head. So, I had to take a minute to just think about what just happened."

Looking back now, Merrill can only thank his parents for capturing such a satisfying moment.

"Just looking back on that video, just seeing my expression is just insane," he says. "I was in denial. I was only 8 years old, so it was really hard for me to process what had just happened, but it was one of my proudest moments."

Before landing Yellowstone, Merrill's brush with Hollywood consisted of a few commercials. Suddenly, his profile would be elevated exponentially thanks to an abundance of pivotal scenes with Costner in the early seasons of the show — from bonding over fishing and bedtime stories to indulging on donuts and expertly negotiating his first horse.

But very quickly Tate's innocence is also robbed of him, and he's forced to face quite head-on the dark reality that comes with belonging to a family with a myriad of enemies. That notion's underscored with Merrill as a central figure in numerous scenes, and the trauma Tate endured would have been a challenge for an experienced actor, let alone a child actor working on his first-ever TV show.

Like in season 2, when Tate's kidnapped off the Dutton Ranch. His father, Kayce (Luke Grimes), finds him in the bathroom, shaved head and all. Tate appears physically unharmed but the psychological damage's evident, as Tate lets out an excruciating scream when he can't recognize his own father. The trauma's accentuated in season 4, when Tate fatally shoots a masked man inside the Dutton Ranch with a shotgun to save his mother Monica (Kelsey Asbille) from a potentially fatal attack.

No longer could Merrill draw on his boyish charm, like when he defended his father Kayce from his bullying brothers, prompting Merrill to throw a fish straight in Lee Dutton's (Dave Annable) face before running to his father to cry on his shoulders. Merrill soon realized he had to up his acting chops, which also meant acting was no longer just a hobby. 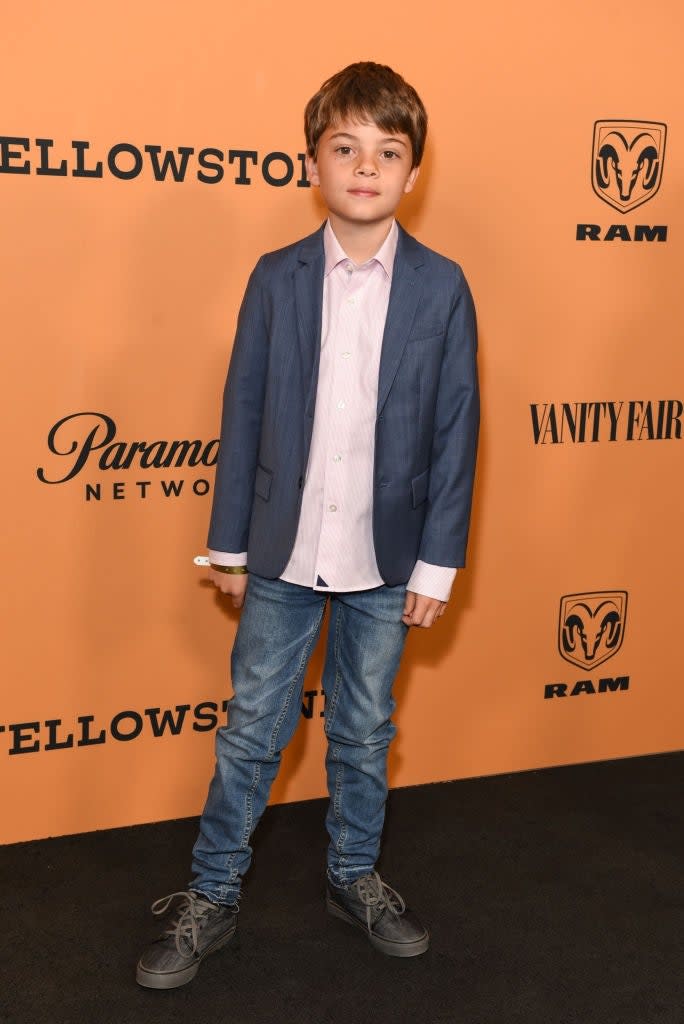 "I was kind of just doing it for fun," Merrill admits. "Like, 'Yeah, I wanna be on TV! Yeah!' I didn't really have a good sense of what acting really was."

Merrill says, naturally, everyone on the set treated him like a kid when he first signed on. But as his character evolved, so did the way his co-stars viewed him.

"In this past season people have seen that I've grown up and that I'm really taking acting seriously," he says. "I think [Yellowstone creator] Taylor [Sheridan] is gonna recognize that, too, and he's going to write more grown-up scenes for me."

Tate endured yet another traumatic experience in the season 5 premiere, when a very pregnant Monica's behind the wheel with Tate by his side and they crash into a buffalo that darts into the road. Tate suffers serious injuries, albeit non-life threatening, but he's horrified when he gets a glimpse of the dead driver from the second vehicle involved in the crash. He hears his mother screaming in agonizing pain from afar, and she turns him away so he doesn't see her in such dire state.

The next morning, John Dutton visits Monica in the hospital after she suffers an unimaginable loss — a baby boy — in the aftermath of the crash.

"I had a brother… for an hour anyway," a stoic Tate delivers the news to his grandfather. Tate then tells John that Monica and Kayce named the baby boy, John, after him.

For that car crash scene, Merrill tells ET the emotional scene required him to draw inspiration from those closest to him, like his mom.

"I switch the kid out that's in the show to my real-life friends and family. Just close my eyes, think about it, get in contact with my emotions and really just tap in and lock in," he says. "In the car crash scene — I know this is kind of effed up — I use my real mom as the face of Kelsey and I just tapped into my emotions, and it came naturally." 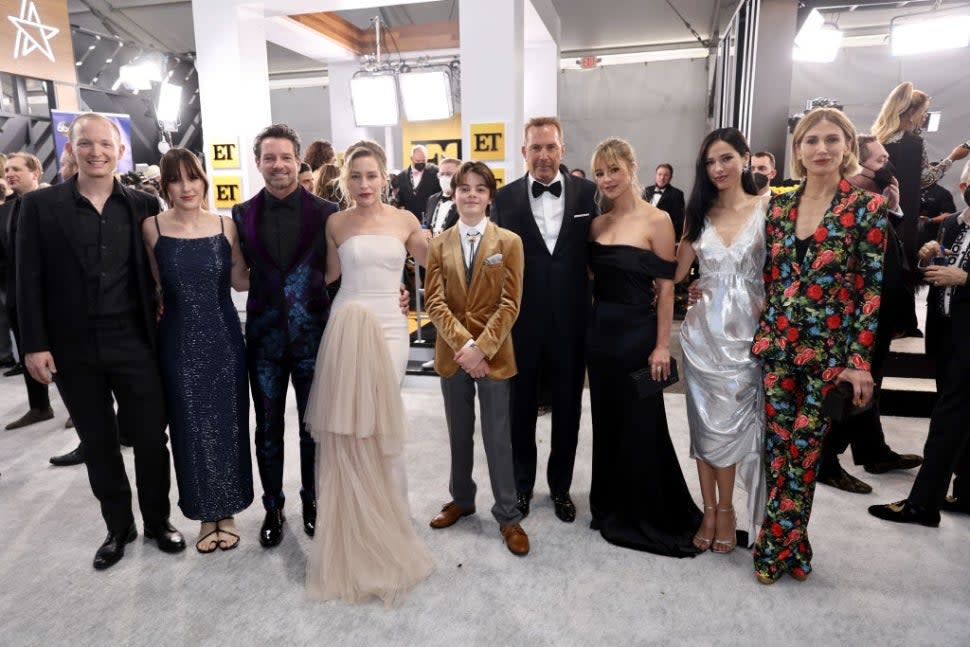 Merrill — who also appeared in the final two episodes of the NBC hit series This is Us playing Justin Hartley's teen son — says growing up on Yellowstone is the opportunity of a lifetime, but he admits that no longer being the only kid actor on the show is also pretty cool, thanks to Finn Little's character, Carter, joining the show.

"All of the seasons it's just been adults, no kids," Merrill says. "This recent season me and Finn have some scenes together. We've grown a nice relationship with each other. We're good friends. We share the same music taste. Kyle [Red Silverstein], he plays young Rip, he's also one of my best friends."

The show has dominated the frenzied ratings race since it premiered in 2018, but Merrill says the millions of viewers each week hasn't exactly translated to stardom and fans instantly recognizing him, and he wants to keep it that way.

"When a season airs I usually am grown by the time I've shot it," he says. "So, I look way older. I don't get recognized a lot but it's cool. I don't want to get recognized, personally."

The season 5 finale of Yellowstone airs Sunday at 8 p.m. ET on Paramount Network.