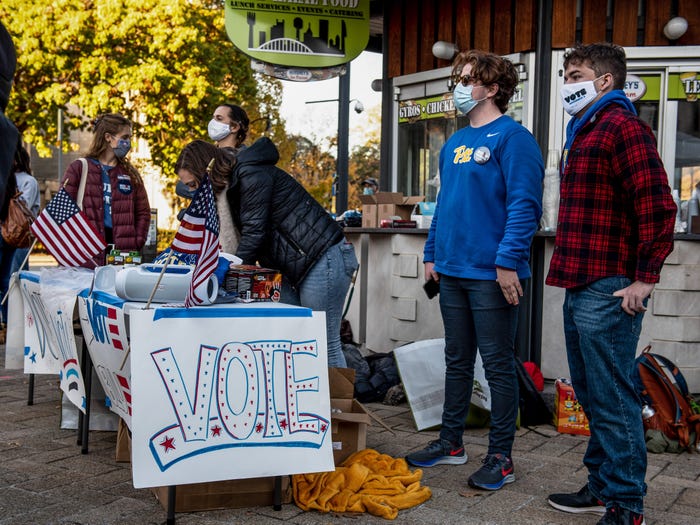 Young people of color voted overwhelmingly for Joe Biden in this year's election, while young white voters were much more evenly split between the former vice president and President Donald Trump, according to the Center for Information and Research on Civic Learning and Engagement (CIRCLE) at Tufts University.

The data, compiled by Tufts, is based on a survey conducted by the Associated Press VoteCast on over 110,000 likely voters. The survey showed youth in general, or voters aged 18-29, supported Biden by a margin of 25 percentage points, with the Democrat receiving 61% of the youth vote and Trump receiving 36%.

Among young white voters, that margin falls sharply to 6 percentage points, with 51% voting for Biden and 45% voting for trump.

However, among youth of color, the divide increases significantly. Youth of color supported Biden over Trump with margins of 76, 69, and 51 points for Black, Asian, and Latino youth, respectively.

Kei Kawashima-Ginsberg, the director of CIRCLE, said, based on surveys conducted earlier in the year, she expected the young white vote to favor Biden by a slightly higher margin than it did.

"Young people who are white in our surveys showed very similar interests in climate change and racism, as well as mental health," she told Insider. She also said "far more young people this year had said they feel like they're part of a movement" in reference to progressive causes.

But the divide between how young people of color voted and how young white people voted was largely driven by one outlier group, young white men, according to Kawashima-Ginsberg.

"Women and men of color are not showing that kind of departure from each other," she said.

Kawashima-Ginsberg also said voter turnout generally among youth was expected to be healthy this year, but that there have been unique obstacles.

"Part of the challenge is with the youth vote during the pandemic," she said. "A lot of things got in their way even though they were engaged and energized."

She said many young voters often get registered to vote while on campus through in-person outreach initiatives. With many colleges and high schools operating virtually this year, those potential voters may not have been reached.

Kawashima-Ginsberg also said there are other pandemic-related barriers, such as many young people losing their jobs or not having transportation to a polling place.

In 2016, a third of youth who were registered to vote but did not said lack of transportation was an obstacle, according to a CIRCLE report. She said that poor young people and people of color were especially likely to have issues with transportation.

As a result, rideshare companies offered discounted or free rides to the polls in 2018. Due to the pandemic and people not wanting to use rideshares, those programs either weren't continued or may have been underutilized, she said.